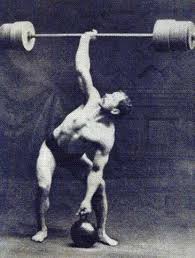 Let’s go back to the 19th and 20th century where the world was dominated by Strongmen who performed unbelievable feats of strength that can never be repeated by mankind ever again.

Names like Arthur Saxon, Eugen Sandow and Paul Anderson  are some of the names lost in folklore. These were some of the strongest names in human history for competing in various strength based sports like Powerlifting, Strongmen contests and actively competed in weight lifting contests.

The feats of strength that they performed were one of a kind and could only be repeated by a select few group of people. For example, Arthur Saxon (Pictured above) used to perform a feat known as two - hands-anyhow.

The goal was to perform as weight overhead with both hands as long as there was no assistance from an outside force. In his stronger arm he would hold a heavy barbell and perform another feat known as a bent press. In his other arm he would hold a smaller weight, which was a kettlebell. To this day this only a select few of people can replicate this feat.

In the 21st century the term Strength is sort of misled. These days people often believe that being bigger is being stronger, which is nothing more than a myth. Strongmen training techniques are somewhat rooted in modern day training programs, but are somewhat misinterpreted by the “experts”. Strongmen training techniques are nowadays labeled with terms like “Static Contractions” , “Isometric Contractions” and “Training to failure”.

These terms are often mislead and misunderstood. It is true that the strongmen   athletes used to employ heavy static contractions in their training programs, but it was more than just that. The strongmen believed that strength is a skill that needs updating regularly rather than viewing it as a destination the way it is viewed today. That’s particularly the reason why so many people back in the day were able to perform so many unbelievable feats of strengths.

There is another unknown training concept known as “Heavy Singles”. In this concept the athlete loads whatever equipment they are using to the maximum of their capabilities and perform the movement once with their full effort.
If the athlete is not fatigued it does one set of multiple reps with the best of their abilities. This training technique in particular boosted their strength levels to unimaginable levels. Once the athlete has fatigued themselves they take as much rest as they need and perform it again. This became the backbone to their unimaginable strength levels. Another important concept is that they always practice their lifts like a skill.

The strongest quality of the old time strongmen will be their mindset. That is their biggest asset.
Posted by thelegendsofmusic.com at 05:51

My name is Anuj Rajkumar, this blog is available to improve your knowledge on Calisthenics so that you can unlock the true potential of your body !
Feel free to leave a comment on any post and also subscribe to my youtube channel to watch popular Calisthenics exercises
https://www.youtube.com/channel/UCdLePvVa_Jyx9-TjGGZQrmQ